The Full-Time Academy Program at Sydney Olympic Park is designed for tournament level players and above and encompass all of the components required to become world class. Players will have access to a quality on court program, physical training, injury prevention screenings, sports psychology, US College Guidance, tournament mentoring, private lessons and parent education.

Our mission is to deliver a world class tennis program to our athletes, enabling them to achieve their full potential on and off the court.

Almost every elite tennis player at some point will experience great difficulty in trying to balance school, daily tennis training, commuting, family time and homework as it takes a huge time commitment to succeed both academically and in tennis.

In order to achieve expertise in any field, a child will need both volume and quality of training throughout their formative years (famously referred to as ‘10,000 hours’ of purposeful practice).

That is why Voyager Tennis Academy and The McDonald College have come together in partnership. Our program provides the opportunity for our students to receive a first class education and a world class tennis program all under one roof. Our integrated program allows our students to complete a full day of school and training by 5:30pm every day.

Our world-class coaching team is led by Luke Bourgeois, a former touring professional and one of Australia’s leading high-performance coaches. Luke received the 2017 Newcombe Medal for Coaching Excellence in Talent Development. The female coaching program is led by former touring professional Jessica Engels. Our coaches have all played top level junior tennis, been coached by some of the most experienced international coaches and many have competed on the professional tour or played Division 1 U.S. College Tennis. They include Andrew Thomas, Steve Colley and Yann Saenger.

We have had amazing results ranging from State and National Championship Titles to winning Main Draw matches at Grand Slam level. We currently have over 50 students who have received scholarships at U.S. Colleges. These scholarships are valued up to $500,000. Please view our Players & Results Page for more information.

There are many benefits to our training environment:

In our Tennis & School Performance Program, our approach is about ensuring that our Voyagers are continually improving towards defined, shared objectives & goals. We have a systematic approach of goal setting and benchmarking in place. At the end of each semester, our athletes are provided with a detailed player report and review meeting reflecting on progress and identifying areas for future development.

In addition to ongoing feedback throughout the training program, Voyager Tennis provides a mentoring session to each player once per term to reflect on progress and set goals. Some examples of the areas benchmarked and tested include:

The review also covers a summary analysis of all progress and identification of areas of development across each of the 4 Cals.

Provides players with access to the same level of practitioners and high performance training equipment that an elite athlete would have in preparing for their sport or the next Olympics.

To support a high volume of level based match-play for rapid player development. View current tournaments and upcoming match-play opportunities.

Provided during the school holidays to provide some valuable support to players such as professional warm up routines; Pre match tactical discussions with coaches; Match analysis and post-match debrief.

Assessing a range of components for player success, such as personalised tournament scheduling and match-play; a weekly training plan balancing squad training and private coaching amongst other areas.

8x sports psychology sessions per year to provide players with tools and strategies to take advantage of their physical, technical, and tactical skills in practice and matches. Also provided are tennis parenting workshops, to empower parents to nurture healthy psychological development.

Including guidance and 1x nutrition workshop.

U.S. College guidance (for Year 9 students and above) for those interested in the U.S. College pathway to professional tennis, in partnership with Australia’s leading College placement service.

This comprehehttps://voyagertennis.com/us-college-pathwaynsive program has been designed by Voyager’s experienced team to meet the needs of aspiring players, through a holistic approach to player development, with support from our partner Study & Play USA.

Our McDonald College players have the opportunity to train 5 days a week from Monday to Friday across 4 school terms per year. Our top coaches deliver high intensity training covering the 4 CALS through 15 on court practice sessions each week. Group coaching covers tactical, technical, physical and psychological components. In addition, players practice themed and competitive match play based on key learnings from the week.

We believe that in order for our athletes to succeed, they need to have a program that looks after all of their on and off court needs. The Full-Time Academy Program provides the complete package and most importantly, it enables the sufficient number of training hours required of elite athletes.

For students who attend other schools, there is still an opportunity to get involved in The McDonald College tennis program which runs in line with NSW school term dates.
Many of Sydney’s private schools break up 1 week earlier than our academy program finishing date, which provides a great training opportunity during that week.
It’s quite common for students attending public and other schools that run in line with the academy program, to attend an Elite holiday camp for a day or 2 during the last week of the term as well.

The Voyager Academy encourages all players to use the school holiday period as a time to test their progress and compete in the numerous tournaments on offer.

Our Tournament Mentoring Service is where our Voyager coaching team travels to tournaments to provide valuable mentoring to our players. 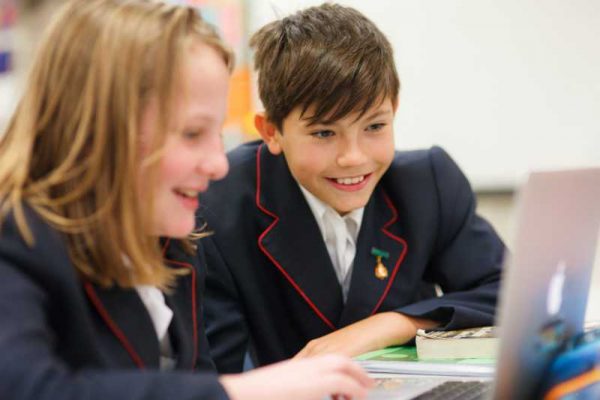 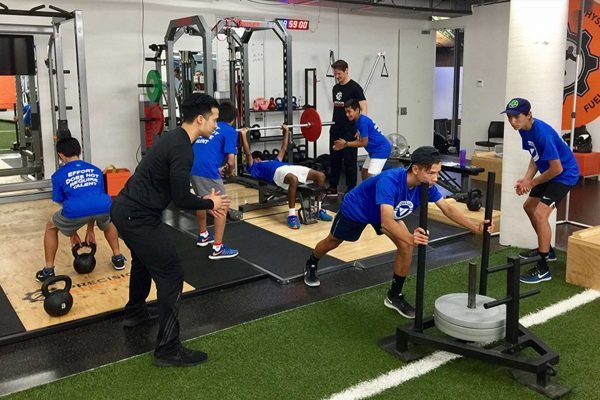 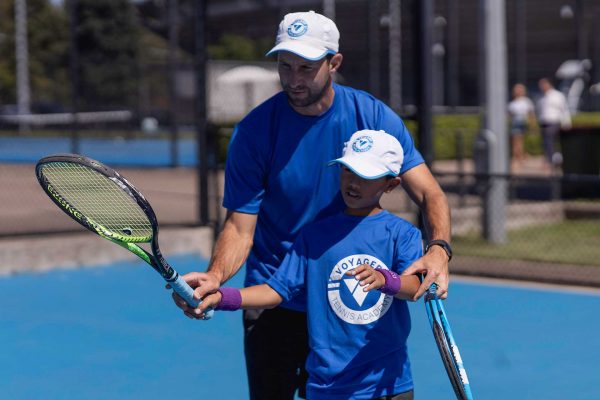 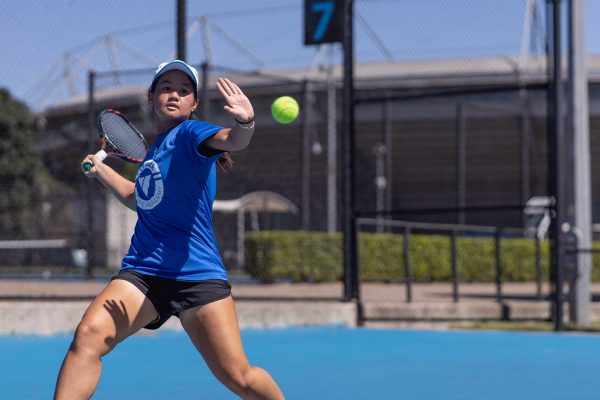 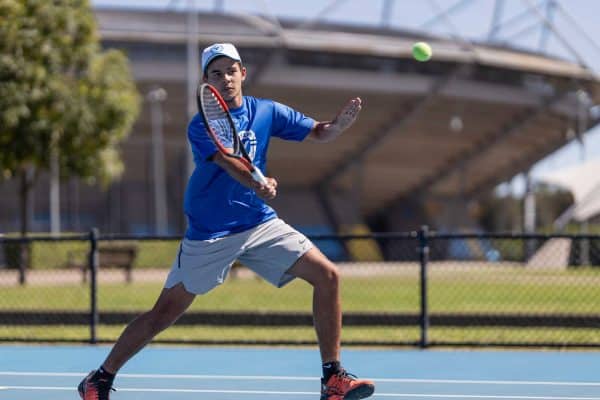 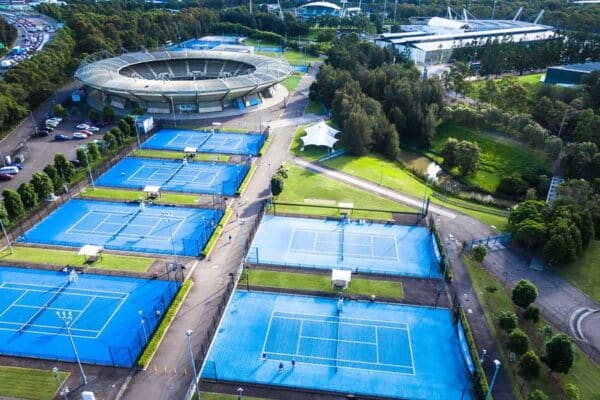 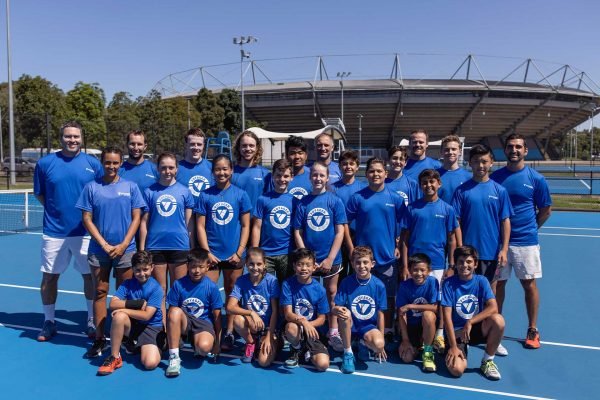 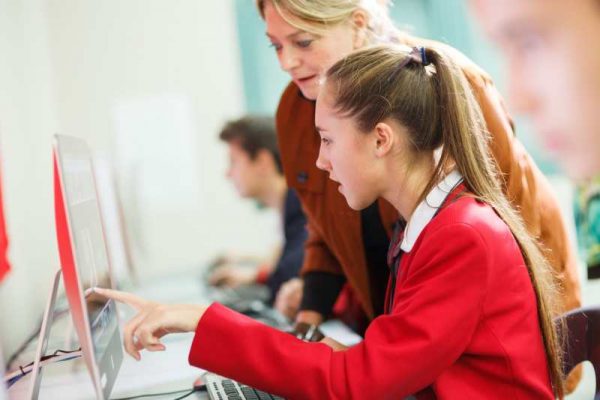 The McDonald College Program currently has a number of students from various countries including Japan, China, India, United States, Singapore and more. For more information for players coming from overseas visit our Internationals Page.

About The McDonald College

The Mcdonald College has a student population of just under 300 students from Kindergarten to Year 12. It is co-educational and non-denominational. Being a co-educational and non-denominational independent school, the College aims to kindle a deep love of  performance whilst fostering academic rigour and a life-long love of learning. The school day is structured so that students can dedicate 2.5 -3 hours of tennis training each day.

There are 3 levels of performance offered:

The aim of the Voyager/McDonald partnership is for students to successfully graduate from Year 12 with an HSC ATAR worthy of a U.S. or Australian College/University Scholarship.

The McDonald College prides itself on providing flexible learning options for students recognizing their many performance demands whilst completing their secondary schooling to the highest individual level.

The McDonald College recognises that students working at an elite performance level will require understanding and support to attend tournaments and be personally organized/disciplined enabling them to complete all academic requirements concurrently. Many of our players are Nationally Ranked for their birth year.

For more information about the college visit The McDonald College website.

For The McDonald Students who don’t live in Sydney there are a number of accommodation options to consider:

The steps to enrol in the Tennis and School Performance Program are as follows:

Step 1: Register to attend our next Tennis Open Day to get an insight into how the Full Time Elite Program is delivered
Step 2: Book in for a trial day where players can experience a full day in the program combining the academics and tennis
Step 3: Arrange your course attendance dates. Enrol with both the Voyager Tennis Academy and with The McDonald College
Step 4: Pay course fees prior to commencement of program & complete and sign all forms

Playing level and attitude criteria
Please note that there are no guarantees of a player being accepted into the program. This is an elite program with many of Australia’s best junior and senior players and we only accept players with a UTR that meets the academy requirements.

Program Dates
The Tennis and Schools Program runs in line with the NSW School term dates.

Course Fees
Fees will be provided on application (N.B. All international transfers and Agent Fees are additional)

What our Voyagers say about us.

We moved to Sydney from Singapore so Ethan could benefit from a program that integrated academics with elite sports training. In the five years we were there, we saw how well that worked. Ethan made huge progress in the sport and achieved his goal of obtaining a Division 1 college scholarship after his time at Voyager. He also won age group and Open titles in Australia and three ITF Junior singles titles. We found the programme’s schedule provided him with a good balance of sport, academic and sufficient rest for his young body. We are huge believers of the Voyager Tennis Academic’s holistic approach to long term development and will not hesitate to recommend it to anyone. 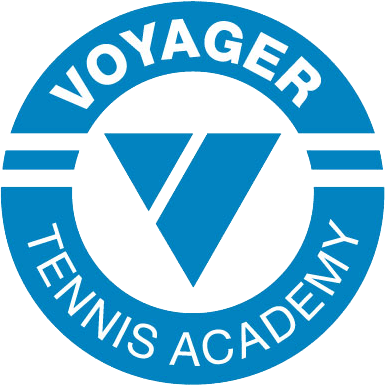 I thoroughly enjoy training everyday at Voyager. All coaches are very encouraging. Andrew and Luke have brought my game to another level and with their coaching expertise my UTR has gone from strength to strength. Not just on the court but off the court they are also great mentors. I’m grateful and thankful for the guidance and training I have received from the team at Voyager Tennis Academy.

Navigating the sport of tennis as a voyage from starting out as a beginner through to adulthood requires expert guidance and support. Voyager Tennis understands this better than anyone, providing the expertise and support for players and parents alike to maximise their goals through tennis. Together, Voyager and Study & Play USA have built a proud partnership built on shared values such as integrity, honesty, hard work, care and professionalism in order to facilitate the opportunity for a life changing experience along the US collegiate pathway.

Since joining Voyager Daniel has improved his physical, strategic and mental game thanks to Luke, Andrew and the coaching team at voyager. They are passionate and dedicated about what they do which then motivates Daniel to train to his full potential. The training and facilities they offer is by far the best in Sydney, with an integrated academic and tennis program with McDonald College. We would highly recommend Voyager Tennis Academy to aspiring tennis players.

We moved from India to Australia in 2020 with a goal to provide Maahi a better platform of education and tennis. The Mcdonalds College and Voyager Tennis Academy has been the best selection. It has been so very comfortable for Maahi to accept and adapt to the new place and surroundings. We felt very confident that Luke & his team would help Maahi achieve her big dream & goal.

I really enjoy the daily squads, training with my teammates and the great one on one coaching I get from my coach Luke. We work together on my strengths and more importantly the areas I need to develop. We have the best coaches and amazing facilities. I feel lucky and proud to represent my academy – The Blue Army!

I love Voyager  because it combines tennis with the school program. I get to play tennis everyday which makes me so happy. I love my coach, Yann – he’s been my coach since I was 4 years old. If you love playing tennis then this is the best academy to be at.